This page includes the latest photos and news on our District-wide facilities expansion and new classroom construction project. Archives of previous updates are availble below.

The modular's are in and bolted down. The crew installing the modular's will be working on Saturday to catch up due to delayed delivery of the final modular last Friday.

As of today, all of the temporary portables will be off the campus! This will now leave a clean slate for the new asphalt which will take 2-3 days to complete later in the project. The District leased portable was picked up a few weeks ago and the District was able to find an agency who took the two District owned portables off our hands...wait for it....at NO COST TO THE DISTRICT!! This saved the District $12,000 to $15,000 as we did not have to demolish or remove them!

On Monday, they will be back-filling soil against the modular's and begin the landscape/hardscape portion while the modular's crew continues to do the finish work on the interior of the buildings.

The playground equipment is scheduled to arrive on August 10th and the furniture on August 17th.

We are adding a repair to the scope of the project. There is a failing sewer pipe that runs underneath the parking lot. Given that we are adding two restrooms to the campus, we feel compelled to protect the tax payer/school district assets by making this repair. We will use Deferred Maintenance funds and expect the repair will not exceed $35,000. We expect this repair to take a week or less and a portable trailer restroom will be available for use while work is underway. 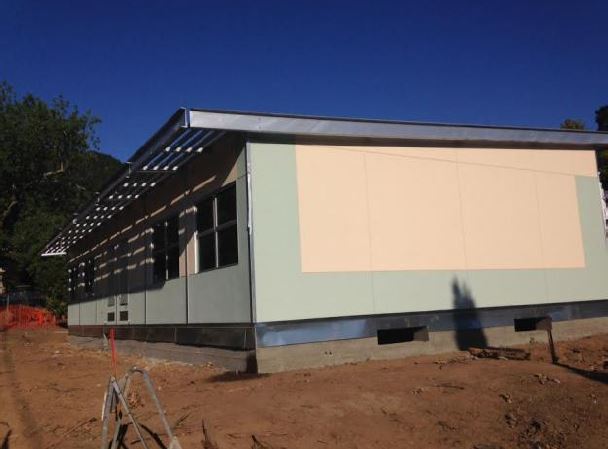 The construction of three new classrooms and set of restrooms is moving forward and on schedule to be completed before the start of the 2015-16 school year.

The exciting part of the project will be occurring July 13-17 as the modular classroom buildings are being delivered and set in place. Each modular section is 12 feet wide and two sections will arrive each day starting on Monday, July 13th. A crane will then set the components in place and be connected together during the next phase of the construction. There will be large, oversized trucks and equipment in the neighborhood. The District and contractors have kept San Anselmo officials and police informed to ensure a smooth delivery.

Within the next 3-4 weeks, the new playground structure will be installed, the blacktop portion of the play yard will be re-paved, and finally, new landscaping will complete the project!
The project is funded through the voter approved MEASURE A Bond Funds. The District thanks the community for their support of our students!

In about 11 weeks, the new 7th- and 8th-grade buildings will be turned over to the District for move-in preparations. The exteriors of both buildings are almost complete and the developer is now concentrating on interior finishes, including acoustical treatments in the music rooms and casework and furnishings in the classrooms and learning centers.

The developer has also started the remaining exterior landscaping and 'hardscaping,' which will pull the campus spaces together into a cohesive whole. The amphitheater walls are being formed and next month the walkways and pervious pavement installation will start.

In addition to building and exterior construction, our IT group has been busy installing an improved and robust networking infrastructure. This new network foundation includes new data transmission swtiches that improve both Internet access and speed, allowing teachers to project and integrate Internet-based information and digital curriculum tools into classroom instruction.

At the end of the last school year, the Board of Trustees approved the Brookside Elementary School project. The other three projects are on hold until the most current assessments are complete and Bonds can be issued to raise the necessary funding.