Construction of the modular classroom at Manor Elementary school to accommodate increased enrollment began on January 9th.  Prior to actual construction the playground structure was relocated to make room for the placement of the modular classroom building.  Plant Construction is the Developer for this project and Marshall Lee Architects is the architect of record. The building will be  delivered to Manor over the President's week break in February. 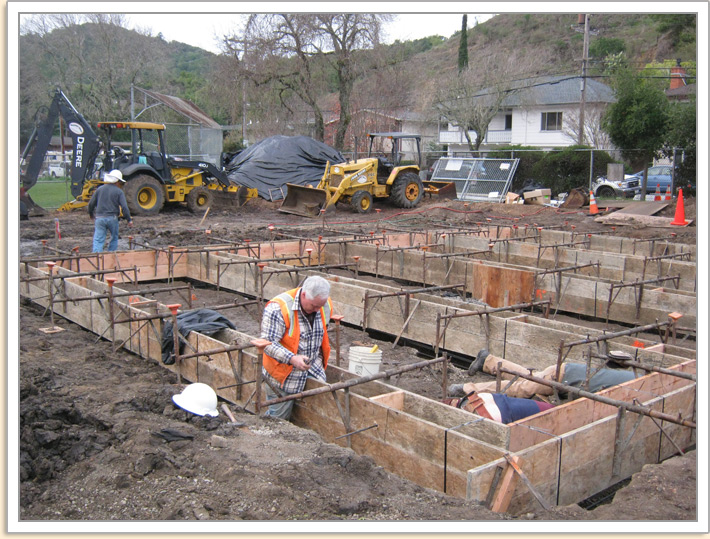 The Board approved pre design plans for the Manor Elementary School at the January 10, 2012 board meeting. The approved plan places two new classrooms at the front of the school and modifies the parking/drop-off area.

The Board approved pre design plans for Brookside Upper Elementary School at the January 10, 2012 board meeting. The approved plan will convert the existing library pod into kindergarten complex (3 classrooms with restroom), create a kinder play area, build a new library at the front of the school and replace one of the existing portables with a modular classroom building  Some improvements for a pedestrian pathway, ramps and  parking lot modifications are in the scope of work.

The Board approved pre design plans for Brookside Lower Elementary School at the November 29, 2011 board meeting.Thedesign includes five classrooms, a new Multipurpose Room and some hardscape modifications.

The Board approved pre design plans for Wade Thomas Elementary School at the November 29, 2011 board meeting. The approved plan will add four classrooms along Ross Avenue and maximizes the playground space for student use.

The Board has approved Plant Construction as the Developer for the White Hill project. The final configuration was approved by the board on October 18, 2011.  The developer has been working closely with WRNS Architects to complete the construction design documents to submit to DSA in early February.  The Board will receive an update at the February 7th meeting.

The Board approved the Middle and Elementary School Specifications at the December 11, 2011 board meeting and specifications are now posted on the District website.  Educational specifications serve as the link between the educational program and the school facilities.  They translate the physical requirements of the educational activity to be conducted so that the architectural concepts and solution support the stated educational program.  In 1994 the California Department of Education was directed by the Legislature to formalize regulations governing standards for the design and construction of new school facilities.  Included with those standards are requirements for the submittal of educational specifications.  Those requirements are delineated in Ed Code section 39101(c) and also listed in the California Code of Regulations, Title 5, section 14030 (a).

These documents represent numerous hours of input from teachers, administrators and other staff.

The Citizen Oversight committee is scheduled to meet on February 15th.  At this meeting they will review the audit of the Bond funds and receive an update on the progress of all construction projects.